On Saturday I went to the London Slutwalk with a few Nottingham feminists.  I had such a wonderful time; it was probably the best feminist events I’ve ever been to!  The Nottingham slutwalkers held a crafternoon earlier in the week, where they made the following wonderful placards:

The Nottingham placards. Mine read: "I say YES a lot, but respect my NO!"

Fran & Stuart with their excellent placards

There were some incredibly inventive banners, signs, and costumes – some serious ones, and some silly ones:

"still not brave enough to go to the police" "are they asking for it too?"

"rape culture can suck my left one"

"check out my magic anti-rape jeans!"

What amazed me the most was the diversity of people marching!  As well as young women, there were loads of men with awesome banners and costumes:

A dog in a basque (which I sadly couldn’t find a photo of! if you have a photo, let me know in the comments and I’ll link it!)

And some ridiculous fancy-dress:

I also met the lovely people from feminist blog Bad Reputation, who had a great banner: After a tiring 2-hour march in the sun, all 3000 of us poured into Trafalgar Square for the rally.  It was uncomfortably hot – damn you BBC weather for telling me to prepare for rain! I was melting in my black slut outfit!  But despite my discomfort, the rally was incredibly inspiring, and seeing the sheer volume of protesters gathered together was an amazing feeling. 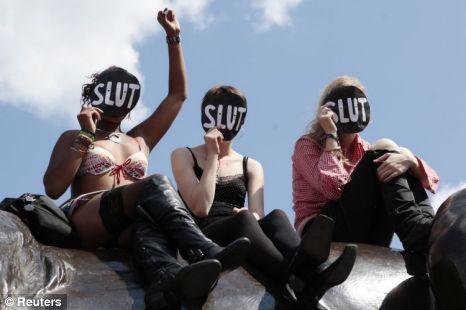 A little while later, we were interrupted by a naked bike ride. London is amazing.

Here are some more posts about Slutwalk that are better than mine:

Political Scrapbook: The Ten Best Signs from the Slutwalk – http://bit.ly/jMO9i