When asked, I always say I’m a fan of Eurovision – but what I really mean is I’m a fan of everything that goes with Eurovision.  Picking a team, dressing up, getting drunk, tweeting along with the internet – it’s like being in on a big private joke!

I’m not particularly engaged/interested in the music – some songs are great, most are forgettable, and some are laughably, cringe-inducingly bad.  But therein lies the fun!  So this year my friends and I had a live-tweet Eurovision party, complete with snacks from participating countries (spain – salsa; france – bread and cheese; russia – vodka).  As one tweeter put it, Eurovision is one of like the top five things Twitter was invented for, and this year Twitter did not fail to disappoint.

just in case you were wondering what eurovision is pic.twitter.com/wFAcyY351P

Note to Americans, UK Twitter will go really weird for a few hours. Bear with us #Eurovision2015

After the excellent news of Ireland passing the same-sex marriage law earlier in the day (what a great day for gays!), Kirsty was certain that they had the competition in the bag.  Except… they didn’t quality this year. 🙁

"I reckon Ireland will win tonight" – @MsKirstyFace …who's going to tell her?

As the show began and we inspected our scorecards, a heated discussion took place as to whether it’s ok for non-European countries to be in Eurovision:

"I'm anti-Israel – not in a political sense, in a eurovision sense" – @richendaleonard #eurovision

But of course there were other controversial interlopers this year.

A few songs in, we were greeted with the UK’s tragic entry (Electro Velvet – Still in Love with You).  This drew criticism from the group, as we noticed that the lyrics were a bit creepy and possessive.

Annual reminder to vote for the 2007 Ukrainian entry. #Eurovision http://t.co/mO2XOKl4cm

Though personally, I don’t think anyone will ever beat Finland in 2006: 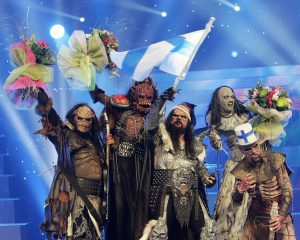 There was a surprise entry from Lithuania with 2 same-sex kisses live on stage!  I can’t remember anything about the song, but we all cheered at the kissing.

No more straight kissing. All of us were immediately disgusted. More girl-on-girl, please! #Eurovision2015

Next, a creepy entry from Norway:

WHAT THE HELL DID YOU DO NORWAY??!!! #Eurovision2015 pic.twitter.com/GinGvZ4HRj

Then, our favourite of the night, Serbia. 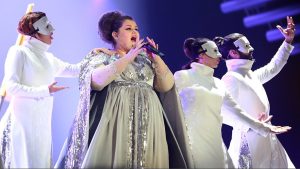 Oh Serbia.  We were so certain that you were going to win.

The first half ended with what turned out to be the winning song, Heroes by Måns Zelmerlöw (Sweden).  It was a good song with the best staging of the night, though a lot of people were tweeting about how homophobic Måns was following his comments about gay sex being unnatural.

I later discovered that he apologised extensively for his comments, and in a winners press conference he addressed the controversy, and thanked his gay fans for looking past his comments.

Next: Australia.  She doesn’t even go here.

YOU CAN'T SIT WITH US #AUS

To be fair, it was a good song – although much more serious than we were expecting, like they were really trying to win.  Who does that?

We've gotta ALL vote Australia because a) it's a good song; b) to cause the organisers a headache. #Eurovision

It all went a bit downhill after that, with the second half dominated by ballads and boring songs.

Poland had a disabled singer which is really badass in terms of representation, but the song was dull, and sadly they did really badly in the votes.

"Looks like he drew that moustache on" – @eve_moriarty #mne #Eurovision

I loved Latvia’s entry (Aminata – Love Injected).  It was one of the only entries this year that I’ve listened to since the show.  Wailing lady singer with a prominent piano accompaniment – what more could I want?

Now for the results.

"We got 1 point from Ireland, we're fucked!" – @MsKirstyFace #Eurovision

No points from Australia?! "We colonised you for nothing!" #eurovision

And we were devastated that our favourites (Serbia, Latvia, Belgium) were snubbed, while a homophobia country like Russia was close to winning.

she's gonna be crying on the other side of her face! – @MsKirstyFace

You have the twelve points of my heart, Serbia. #Eurorvision #SRB

In the end, we were ok with Sweden winning – we had to concede that it was pretty good.