Earlier this year I went on a mini-break to the beautiful city of Edinburgh. I’ve wanted to do more travelling for a long time, and this year decided to prioritise travel by making sure that I got away every few months. This was only a short break, and not too far from home (a 50-minute flight from Cardiff), but it’s always good to get away, see new sights, and experience new things. 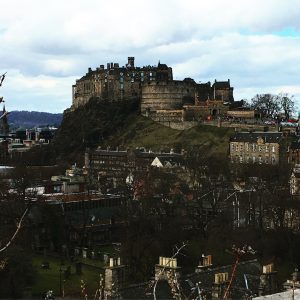 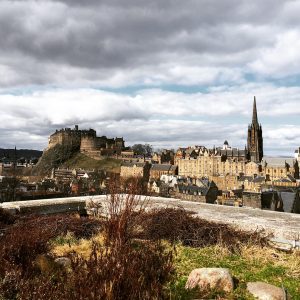 After an early morning flight, we spent our first morning in Edinburgh having a delicious Scottish breakfast in a lovely little cafe called Tani Modi, complete with haggis and tattie scone! I don’t care that haggis is conceptually gross, it tastes fucking delicious.

We then did our own little Harry Potter trail – walked up to the beautiful Old Town, visited the ornate graves in Greyfriars Kirkyard where JK Rowling got inspiration for her character names from (I saw the graves of Tom Riddell, McGonaghall, and Moodie!), visited Victoria Street which inspired Diagon Alley, saw the private school that partly inspired Hogwarts, and walked past The Elephant House where Rowling wrote some of the books. Trip Advisor and Air BnB were selling guided Harry Potter tours that started at £15 per person, but I just looked online for all the places in Edinburgh to visit and found them myself for free. The walking was tiring (especially after such an early morning flight) but totally worth it.

First morning in Edinburgh was a Harry Potter trail – we visited Victoria Street which is said to have inspired Diagon Alley, Greyfriars Kirkyard to see the graves that inspired Harry Potter character names including a “Tom Riddell”, the private school that partly inspired Hogwarts, and Elephant Cafe where Rowling did some of her writing. Trip Advisor sold Harry Potter tours for upwards of £15 per person, but we made a note of the places to visit and just went ourselves for free! . . . . . #edinburgh #harrypotter #harrypotteredinburgh #victoriastreet #diagonalley #greyfriarskirkyard #elephantcafe #harrypottertrail #travelgram #instatravel

We then visited the National Museum of Scotland and saw the view of the castle and the city from the roof of the building which was beautiful and resulted in some of my best photos from the whole trip. <3

After an afternoon nap in our Air BnB, we walked up the nearby Calton Hill to watch the sunset. It was a tough steep walk and slightly too overcast to properly see the sunset, but we still enjoyed some beautiful views of the skyline.

Today we went on a guided day trip to Loch Ness – somewhere that none of us had seen before, that we really fancied visiting while we were in Scotland.

On the way up, the bus stopped in a little town called Callender, where I had the best pie I’ve ever eaten, from an unassuming award-winning pie shop called Taste of the Trossachs.

We drove past the Kelpies, then made our way to the stunning Glencoe where we stopped for some photos of the breathtaking view (my phone honestly can’t do justice to the sights).

The tour then wound its way along the Great Glen until we arrived at the village of Fort Augustus on the banks of Loch Ness. Loch Ness was unassuming and peaceful – I was expecting something more touristy, like a tacky Nessie gift shop or a small museum/tourist centre, but it was exactly like any other tiny rural village, just with an enormous beautiful loch on its edge. There were boat trips available, but after spending almost 5 hours on the coach (!!) we couldn’t face getting on a boat, so decided to make the most of our legs and walk around the loch.

It was so good to visit Loch Ness and see so much of the Scottish Highlands, which are beautiful, but I would recommend doing it in a car rather than a coach – the coach trip was very bumpy and long, and being beholden to the pre-planned stops was pretty annoying.

When we got back to Edinburgh at around 8pm, we were too tired to do much else so went for a delicious Mexican dinner and some drinks in Pancho Villas, and then crashed back in our rooms.

We had breakfast this morning in Mimi’s Bakehouse which was a lovely little place (there are a few across Edinburgh so pop in if you’re ever looking for a breakfast joint).

Then we went on a brilliant walking tour called ‘Secrets of the Mile’ with Mercat Tours – the guides were friendly and knowledgeable, and the group was around 10 people which was a decent size for a good group dynamic. We walked past some walking groups with 30 people to 1 tour guide, and it just looked uncomfortably crowded and like you were being herded along. We saw lots of great stuff – you’d step off the bustling High Street down a wynd, and suddenly it felt as though you’d stepped into a different country or time period!

The tour ended at Edinburgh Castle (where we got to skip the 30-minute entrance queue!), where the guides showed us around the castle grounds for 20 minutes before leaving us to explore the rest ourselves. We also saw the 1 o-clock canon being fired which was pretty cool.

After the castle, we went for lunch in The Frankenstein pub, which is a former church that was converted into a horror-themed pub, complete with gothic fixtures, green and blue plasma plates, Frankenstein movie posters, and a giant Frankenstein’s monster statue at the entrance. We ate our food while watching a screening of Frankenstein Meets The Wolf Man (which coincidentally is set in Cardiff)! So cool.

After the pub, we spent our last afternoon in Edinburgh at the National Museum of Scotland to look at the exhibits that we missed on Monday’s visit (I always enjoy the dinosaur and natural history exhibits the best).