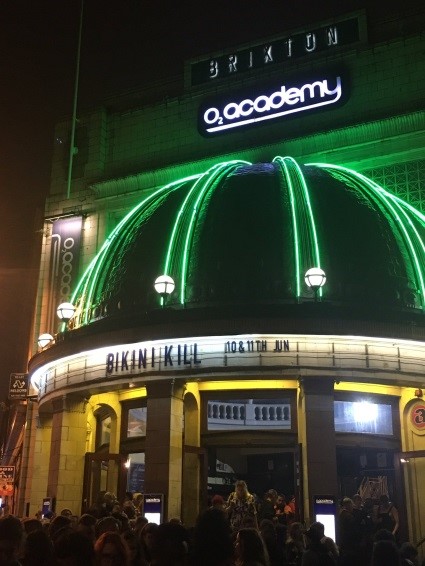 I was lucky enough to get a ticket for the Bikini Kill reunion gig in London on 10th June and it was magical. Like most women of a certain age, Bikini Kill were among the first few bands that inspired me to create zines and play my own music when I discovered riot grrrl in my late teens. I was particularly inspired by their DIY low-fi attitude – it helped me overcome a lot of my mental barriers, showing me that I didn’t need to wait until I was a ‘good enough’ musician before I could start writing and performing, that if I had something to say then I was already ‘good enough’.

Things I loved about the show:
• Hearing those songs performed live, something I never thought I would get to hear
• screaming the lyrics along with a room full of people
• the charisma and energy of Tobi Vail and Kathleen Hanna
• swapping instruments on stage
• Tobi talking about the band learning their instruments on stage
• Erica Dawn Lyle on guitar
• being in a space with so many women and femmes and queers who were all having an absolute blast
• Feeling entirely safe at a sold out, 5000-capacity punk night
• the support act Big Joanie (a black feminist punk band)
• the sloped floor in the stalls which meant that at least for the 2 support acts I had a good view wherever I stood
• the energy and enthusiasm the audience had for the entire set, especially when the band first walked on stage and Kathleen Hanna started posing playfully for the audience
• Kathleen Hanna shouting out Poly Styrene and The Raincoats

Things I didn’t love about the show:
• very tall men standing inconsiderately in front of shorter women in the standing area (girls to the front!!)
• how expensive the merch was (£25 for a t-shirt is just a bit much)
• how ridiculously crowded it was in every corner of the room
• how hot and sweaty the room was
• people throwing drinks off the balcony at the people in the stalls
• people trying to mosh in inappropriate places
• the venue’s sound made the music sound echoey and muddy

My favourite songs from the night:
• New Radio
• Hamster Baby
• Suck My Left One
• Reject All American
• Double Dare Ya
• Rebel Girl (a perfect ending to the main set, complete with flashing rainbow lights).

During the day I met up with some zinester friends, where we went for drinks and street food in Pop Brixton, and talked music, zines, and lamented the price of a pint in London. (Seriously, 8 pints cost nearly £50, how can anyone afford to get drunk in London?) It was great to hang out with people I hadn’t seen in so long, plus it felt important to hang out with zine friends given that Bikini Kill were so instrumental in the zine scene back in the 90s – Bikini Kill are a part of our collective history, in a way. I’ve always loved this quote from Toby Vail about zine making, and found it super inspiring back when I first started making zines – what better way to end a gushing opinion piece about Bikini Kill?

“I am making a fanzine not to entertain or distract or exclude or because I don’t have anything better to do but because if I didn’t write these things, no one else would either”