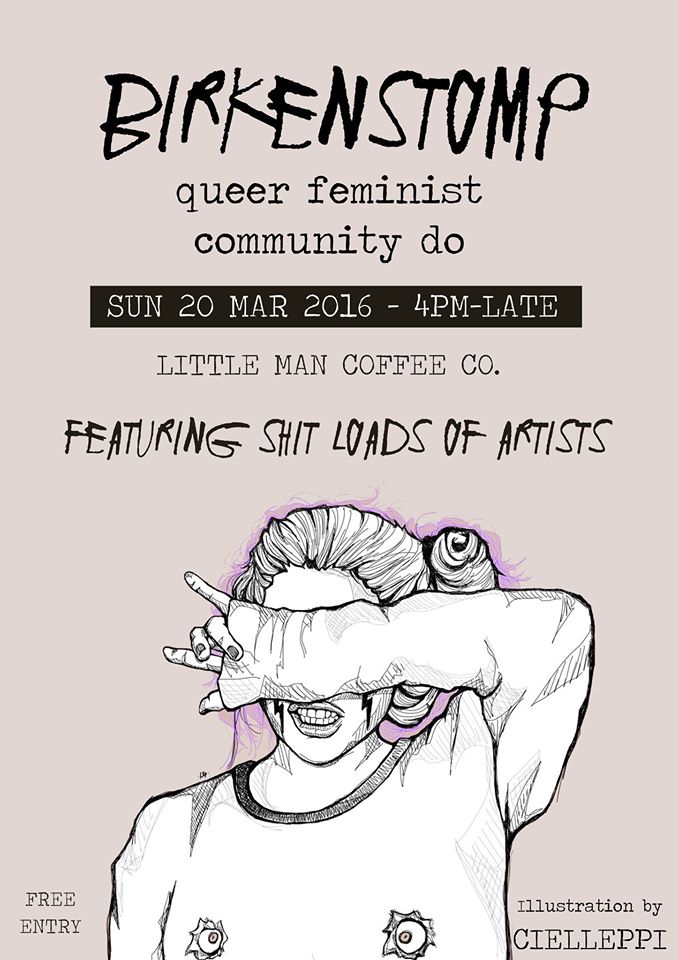 Following an invocation to the power of Patti Smith, we’re back! After a two-year break, Birkenstomp is raising its banner in celebration of all things girl and queer.

♀ Amo Rex – A massive welcome back to our dulcet-toned butch cowgirl froms the diff.

♀ JAKE – A welcome return to our poet in residence (not really, we just don’t let them go anywhere because we love them).

♀ Josie Henley-Einion – performance writer. The last time she performed, she sang us The Uterus Song (AKA The 13 Days of January) and it was hilarious and made us wince and wet ourselves.

♀ Barry Island Drag King – BACK BY POPULAR DEMAND! Because he’s naughty and hawt and is called Barry. We been asked to not let children see, so avert their eyes if they’ve not left by then.

♀ Catherine Elms – dark cabaret / rock / grunge. Catherine did an independent release of her EP ‘So Far from Whole’ and she’s coming from abroad* to play for us!

♀ Sam Hickman – A welcome return to Sam Hickman, harpist, busker, all round good egg. Probably the only one bringing class to our sordid little venture.

♀ Eve Moriarty – ‘Eve is a poet (for which she’s won awards) and a feminist (for which she hasn’t). From Lancashire via Swansea, she’s got a funny accent and a whole set of angsty milennial poetry dealing with gender, history and mental illness. Bad jokes an optional extra.

♀ Eleri Angharad – Alt-Pop from Swansea, inspired by Taylor Swift and Gabrielle Aplin. She has one EP out ‘Ticket to the Sky’ and another one on the way, inc. her latest single ‘Fuel’.

We dunno. A raffle? Maybe.

AS ALWAYS, THIS EVENT IS FREE (although, for the first time ever, we will be passing a bucket around to try to raise cash for the numerous artists donating their time, materials and bus tickets to get here). It’s ACCESSIBLE (we will also endeavor to keep all workshops on the ground floor). It’s CHILD-FRIENDLY (to a point). We don’t know when kicking out time for kids is. We’ll find out. Obviously, it’s trans-inclusive. Do we need to even say that?