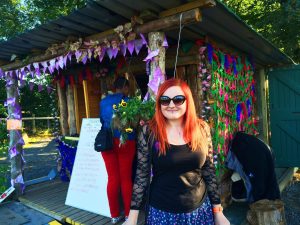 This Thursday I spent the day at Women in Tune, a women-only music festival that takes place every year in Lampeter, mid-Wales.  I only came down for the day as I was performing that evening, but next year I’ll definitely try to camp out for a night or two! 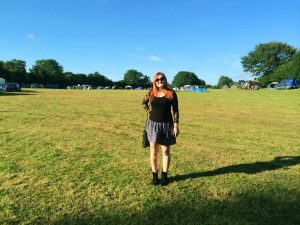 We arrived in the afternoon, where we received a very friendly welcome from the organisers, had lots of tea, unloaded my gear, and then hung out at the various workshops.  We were lucky to have really nice sunny weather that day, though it did get quite nippy after about 8pm! 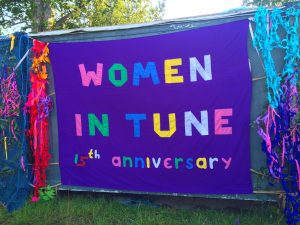 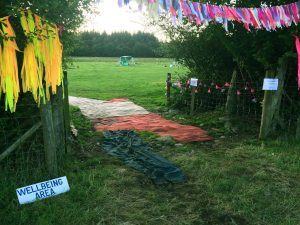 One of the fields was a designated “wellbeing” area; inside were flower beds and herb gardens, all decorated with bunting, fairy lights, and handmade cloth decorations.

The whole event felt very inclusive and welcoming, not only in terms of how friendly the volunteers were, but also in terms of the provisions they had made for women to be as comfortable as possible.  There was a “help” board near the entrance, which had lots of information about local services (e.g. bus routes, shop info), welcome and thank-you notes, and adverts for festival volunteers including signers, workshop assistants, and dog walkers for less able-bodied women who had brought guide dogs.  There was a signer on stage for every performance (signing the compere’s words and the performer’s lyrics) which was such a nice touch.  They also brought around blankets for women who were cold in the evening!  What lovely people! 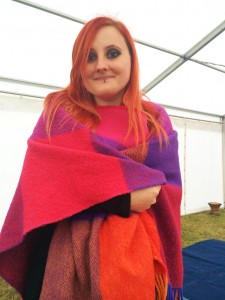 After our dinner of vegan Jamaican stew, we spent the evening in the main tent to watch the acts of the night.  My favourites were:

1. The Wyrd Sisters, who sang medieval drones on a range of old-fashioned instruments including bagpipes, a pibgorn, and a hurdy gurdy!

2. Cor Gobaith, a small choir who sang political songs including an ode to Rosa Parks, a song about Gaza, and an altered version of Welsh choir classic Ar Lan Y Mor (Along the Shore), in which they instead sang about the destruction of the environment and communities.

3. Sera, a Welsh folk singer-songwriter with one of the most beautiful voices I’ve heard for a long time.

4. Harriet Earis, a contemporary harpist who had such an infectious enthusiasm and joy when playing that it made me beam from ear to ear!

I performed second from last, at around 11pm, and it went down so so well with the crowd!  A lot of people cheered at some of my more outspoken feminist lyrics (e.g. “I’m not a virgin, I’m not a whore – I am so much more“)!  It was so amazing, and when I was ushered into the green room after my set I had a teeny tiny cry because I was so pleased and proud of myself! 🙂  Thank you, Women in Tune! <3

Unfortunately my phone died before we could get any photos of my set, but here’s a short video:

(I’ll share the official photos taken by the organisers once they’re published!)

Thank you so much to all the lovely women who whooped, cheered, sang along, and complimented me afterwards 🙂

I have 2 gigs coming up this month: first, I’m playing the Danu stage at The Uplands Music Festival on Monday 25th August (free and open to all; details here), then at Swansea Unsigned on Thursday 28th August.  Tickets are £5 at the door, or you can buy them from me in advance here.