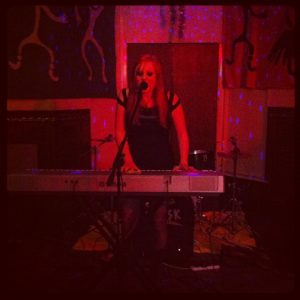 This weekend I played my last gig of 2013 – it was at the Garage supporting local band King Goon. Although a wee bit quiet, the atmosphere was lively and friendly, and my set went down incredibly well with the crowd!  I got paid for my performance, for the first time ever! (twice this year I’ve been given petrol money, but usually I don’t even get that – this is the first time I’ve been paid for the performance itself!)  The band also asked me if I’d like to collaberate with them sometime, which was super flattering 🙂

Unfortunately I didn’t get a photo of the gig itself due to poor lighting, so the above is a photo of me at last weekend’s gig with Tusk at Mozarts (I know that’s cheating).

It felt significant that my last gig of 2013 was also my most successful.  On the whole, 2013 has been an excellent year where I’ve started to find my feet, and take small but steady steps towards achieving my dreams and building a good life.

Review of my 2013 Resolutions:

1. Try Couch to 5K – COMPLETED! Couch to 5k is a fairly intensive, but do-able, podcast program designed to get you from couch potato to running 5k in 9 weeks. Ever since I moved back to Wales 2 years ago and started working, I’ve been very lax with making time for exercise. This is largely because I tend to get into a rut of coming home from work and feeling too tired to exercise, therefore spending evenings lounging around attempting to “conserve” my energy (it feels so counter-intuitive that exercising gives you MORE energy), but also because my parents live in a fairly inaccessible area where going out alone as a young woman felt incredibly unsafe for me.  In the early summer, I moved in with my boyfriend into a much nicer area, and I no longer had any excuses not to try the program.  My fitness was terrible at first, and I made very slow progress, but I kept going despite how difficult I found it, and eventually reached week 5, where I ran for 20 minutes straight!  Given that when I started I could barely run for 1 minute straight, this was an incredible achievement for me.  I stopped running in autumn when I kept catching colds, and eventually had to go off sick with the flu.  I hope to restart the program in the new year, and complete it this time round!

2. Play 3 gigs – COMPLETED! I totally smashed this record, and I am so proud of myself for overcoming the stage fright that held me back all those years!  If I’m honest, I still find that performing live is a frightening and emotionally tiring experience, but I want to keep doing it until it becomes normal and relatively stress-free for me.  Every single gig – no matter how difficult it is, or how quiet the venue, or how socially stressful the experience – is a step in the right direction.  The best bit is the feeling of immense pride and inspiration I get after I step off stage.  I’m actually doing this! I never thought I could, but here I am!

3. Get a tattoo – failed. I’ve been dithering for years about what tattoos to get, and although I’ve decided on some themes and designs, I still can’t decide what I want and where.  I’m incredibly indecisive about getting inked, as I’m very frightened that I’ll change my mind about them later, and grow to hate them.  I do have some concrete ideas now, but didn’t get my butt in gear to get them done before the end of the year.  I will get them done soon though!

4. Try yoga – COMPLETED!  In a serendipitous moment, I managed to get some vouchers for a course of yoga lessons at a gym in Swansea.  I adored the experience, although it was a bit of a faff to drive to Swansea and back just for a 1 hour lesson.  Next year I want to use up the rest of my vouchers, and try some online yoga courses.

6. Read at least 2 books a month – failed. I failed this goal in February, where I only managed to read one book, but I decided to keep going for the rest of the year and managed to read 2+ books every other month!  Even though I actually failed the challenge, I nonetheless feel proud of myself that I read 25 books this year.  I haven’t read that much since I was a teen!

Achievements from 2013 that I am particularly proud of:

1. Overcoming my stage fright and playing regular gigs in my local music scene 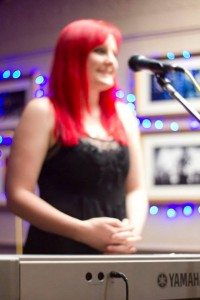 2. Publicly admitting that my dream is to be a full-time musician, and taking small regular steps towards achieving that dream.

3. Working on my social anxiety and socialising with friends and acquaintances regularly

4. Appearing on TV to discuss feminism, despite my fear of public speaking! (although I was on the audience panel, I ended up not being interviewed due to a cock-up by the presenter, who decided to speak to cis-male Christians about sexual assault instead of professional feminists – F U RICK EDWARDS) 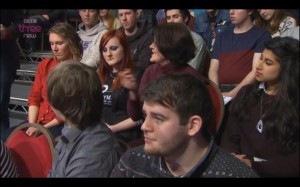 5. Playing a very big gig to 500+ people (Scarlets Kit Launch), and seeing my face on an A-board in the town centre! 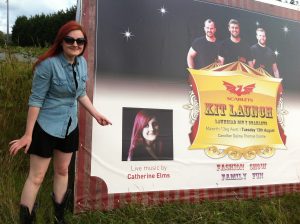 6. Getting my own place with my lovely partner, and fixing it up together

7. Improving my mental health hugely, to the point where I am antidepressant-free for the first time in 2 years!

8. Becoming the secretary for the Swansea Feminist Network, and co-organising the events for 2013 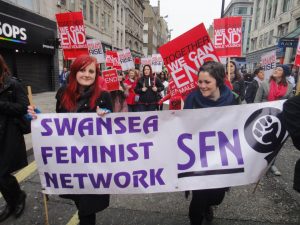 9. Holding workshops, talks and tables at various zine events across the country 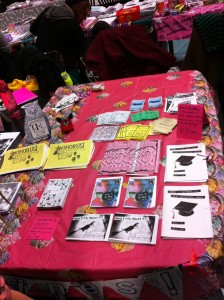 10. Fixing my diet and exercise routine so that my IBS cleared up almost completely

12. Tried surfing for the first time! This was one of my favourite days out 🙂 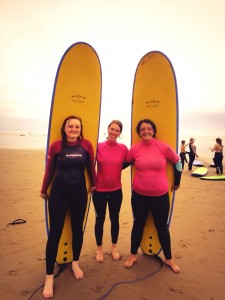