365 Ways To Change The World 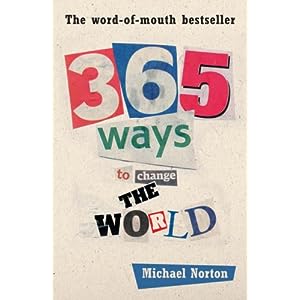 Two years ago, I bought 365 Ways to Change the World by Michael Norton.  Inside, Norton lays out 365 ideas for how to make a difference in the world, one for each day of the year.  The tasks range from the very simple (stop using plastic bags), to the complex (set up a Local Exchange Trading System group in your area).  Though I read the whole thing immediately, I dragged my feet when it came to actually doing anything listed inside the book.  When compiling my Day Zero Project list, I decided that I needed to start doing some more good things in the world, instead of filling my time with mostly self-centred tasks.

I’ve been picking away at this since November, and have finally completed all ten tasks. This blog post details nine of them.  I hope this post inspires you to get busy and do more good for the world – even the very small things, when done collectively, can make a difference.

1. STOP SPENDING
“Around 20% of the world consumes over 80% of the world’s natural resources.  This is in part because we buy so much stuff we don’t need… A Buy Nothing Day gives you a breather to think about whether you need to buy the things you feel you need.  It will focus your mind on the environmental and ethical consequences of consumption.”
One of Norton’s suggestions on how to spend a “Buy Nothing Day” was to hold a swap shop party; this was ideal for me, as someone who has lots of good quality stuff to give away and is always on the look out for cheap clothes.  I organised the Swap Shop via the Swansea Feminist Network (details here) – we used a token system, where guests received a token for every item brought, and could trade in their token for an item.  Everyone was welcome, but in the end it was just us core members plus one or two other visitors.  We had some good swaps, and ate good vegan cake, so it was a lovely day despite the poor turnout.  It was nice to see the unwanted clothes enthusiastically taken by other people, and to see each other wear the swapped clothes over the following weeks!

2. MONEY TALKS
“Money speaks to the masses. You can make your money speak to the world. People pay attention to money – and red ink.”
Although apparently this is illegal.  (As an aside, Norton suggests a couple of illegal activities in his book, including billboard liberation.  But because it’s illegal, he can only suggest that we think about what we might do if it weren’t illegal. Haha.)

3. HUNGER SITE (www.thehungersite.com)
“24,000 people die every day from hunger. Three-quarters of the deaths are children under the age of five.  It is estimated that one in six people in the world suffer from hunger and malnutrition, about 100 times as many as those who actually die from it each year.”
The Hunger Site was launched in 1999 as a way of harnessing the power of the internet to eradicate world hunger.  A visitor to the site clicks the ‘Give Free Food’ button and a cup of food is donated to feed a hungry person.  The food donation is paid for by a sponsor, and the cost of running the site is paid for by ads and merchandise sales.  I’ve set up The Hunger Site as my homepage so I click on the button every time I open Chrome.  You should do the same!

4. UNCOVER YOUR HIDDEN BIAS
“Even though you are consciously committed to egalitarianism and strive to behave without prejudice, you might still possess strong hidden negative prejudices or stereotypes. You believe that you see and treat people as equals, but hidden biases may still influence how you think and what you do.”
I spent one evening exploring Project Implicit, a series of tests created by psychologists at Harvard to detect hidden biases. Topics include age, race, weight, sexuality, and gender-career; the results were pretty eye-opening.  I think it’s important to remain aware of one’s privilege so we can avoid acting upon it, and work on overcoming it.

5. VEGETARIAN/VEGAN CHALLENGE
“Eating a well-balanced diet, free from animal products is good for your health. Here are some reasons why:
– Fat: Vegan diets are cholesterol-free and low in fat.
– Life-threatening illnesses: cancer, stroke, diabetes, osteoporosis, obesity and other diseases have all been linked to meat and dairy consumption.
–  Unwanted chemicals: Livestock, poultry and cows are often pumped full of chemicals, hormones and drugs that are absorbed by your body when you eat these animals.
– Toxins in fish: the flesh of fish can accumulate toxins up to 9 million times as concentrated as those in the waters they live in.”

The challenge was to go vegetarian or vegan for a week.  As someone who comes from a family where meals revolve around meat (we choose the meat and then accessorise it with vegetables and carbs), this was challenging, but rewarding – read my blog post about it here.  I have since slowly cut down on my meat intake, and I hope to eventually cut it out completely.

My shoebox for Christmas 2011.

“Christmas is weeks away… Why not give yourself a treat, and enjoy putting together a box full of small items for someone you can be sure will appreciate them?  There are several schemes that distribute donated gifts, packaged in shoeboxes, to people in countries where children are living in such poverty that a toothbrush, a packet of crayons, or a skipping rope will be a treasured gift.”
I participated in Operation Christmas Child, an international scheme run by Samaritan’s Purse whereby people make gift boxes for children in need around the world.  Just drop off the box at various registered drop-off points (they’re usually shoe shops) with a small donation to cover postage, and you’re done!  Find out how you can do a shoebox donation for Christmas 2012 here.  Michael Norton suggests that if you can’t wait until Christmas, you could fill a box full of school supplies (pens, chalk, paper, etc) and take it with you on holiday to donate to a small, poor school.

7. INTERNET-FREE DAY
“The internet is wonderful in so many different ways … but on the other hand, it glues us to our computer monitors, isolates us from our fellow human beings. … We need to create a balance between the world wide web and the real wide world we live in.  Turn your computer off for one day a week, leave your laptop at home, get out into the real world… and get a life!”
Internet-Free Day is the last Sunday of January (this year it was the 29th).  I spent my Internet-free day writing letters, watching a good film, learning some new songs, and writing in my diary.  It was a good day.

“You probably have lots of books on your shelves, gathering dust.  Why not share them with others?  Select one that you really like.  Nobody is reading it at the moment.  register it on the BookCrossing website, and start its journey into the unknown.”
BookCrossing is a website where you register a book, and leave it in a public place with a note for a stranger to find, read, and pass on themselves.  You can then chart your book’s journey as it gets ‘crossed’ from person to person.  I had signed up to Bookcrossing in 2005, but only ever crossed two books – I used to be incredibly attached to the books I owned, and balked at the thought of releasing them into the wild, as it were.  But I’m far less materialistic nowadays (and have acquired some duplicate books over the years), so I released a few this winter – mostly in train stations and coffee shops where people are more likely to slow down and notice what’s lying around in the surrounding area.  I’ve also joined BookMooch, a similar book-donating service where you list the books you want to give away and other users request them, you get points for every book you send and use those points to request books for yourself.  It’s not as much fun as Bookcrossing, but you get something in return so it’s definitely a useful service.  Having said that, BookMooch hasn’t worked out brilliantly so far – almost every book I listed in my inventory was “mooched” within 2 weeks, but so far I’ve only managed to mooch one book for myself.  I wait patiently for the email that tells me that a decent book has been listed for me to mooch (and I listed some great books  – Mrs. Dalloway, Manifesta, and The Man Who Was Sunday!  Give and take, people!)

“Most of us are not as happy as we might be.  We tend to obsess about the things that make us miserable: doing jobs we don’t enjoy, travelling nose-to-bumper or crushed inside a bus to get to work, the strains of family life, never quite having enough money to afford what we want.”
A collective based in Slough developed a ten-point happiness manifesto which people were encouraged to follow for at least two months to raise happiness levels.  I pledged to do all ten things for two months.  You can read my blog about the experience here.