The Pros and Cons of Colourful Hair

As you all know, I have colourful hair.  My natural colour is a sort of strawberry blonde, something like this:

My face looks weird here because I was suppressing a laugh, I think!

But I got bored of it after years of the same colour.  I wasn’t brave enough to change up the style, so I went through dying phases.  First, dark brown in 2005:

This was a Stargazer dye, so it all washed out within a week.

Then in December 2008, 2 months into my degree, I decided to take the plunge and bleach it.  I wanted to shake up my image a bit, do something radically different, and stand out from the crowd.  I was struggling with making friends, and naively thought that colourful hair would draw people to me (though, it must be said, it did work to a certain extent – it was certainly a good conversation starter, and many of those conversations led to decent friendships!)  So I did this:

–          Colourful hair is its own accessory. You can wear jeans and a t shirt and still look good.

–          It’s a conversation starter. People have started talking to me on buses, in shops, in toilets, and on the street about my hair.

–          It tends to attract other “alternative”-ish people. (one of my old uni friends told me that the reason she decided to start talking to me was because she thought my hair was cool)

I’ve dyed it many colours since then; here’s a quick selection: 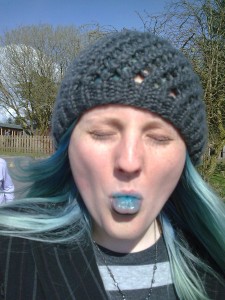 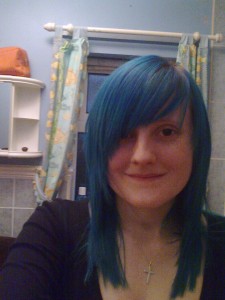 However, three years later, I’ve finally decided to dye it back to a normal colour – probably dark brown again.  Having coloured hair has lost its shine (literally and figuratively), and I’m sick of all the downsides:

–          It’s an absolute bastard to maintain.  I used to dye my hair dark brown, and as long as I dyed it every 6 weeks or so, when my roots came through and the colour started losing vibrancy, the colour always looked fantastic.  Now, with purple hair, I need to dye it every two weeks, and bleach the roots every month, if I want to keep it looking good.  I can’t afford to do it that often, which means that I usually spend half my time having grey-tinted hair and brown roots.

–          Creepy come-ons from strange men who think it’s acceptable to stroke your hair when it’s an unusual colour. No dude, it’s still my hair, FUCK OFF.

–          Dirty men who ask you if the carpet matches the curtains (true story).  Have these men considered the logistics of dying your pubic hair?!

–          You’re less employable. I pretty much lost my retail job in 2008 because I dyed my hair purple.  Fuck BHS. (purple hair is “unnatural”, whereas white blonde with black streaks is totally fine…)

–          Stained bath towels, pillows, and collars (I learned the hard way that dark blue towels are the way forward).

So I return to being normal and unmemorable – but with hair that’s easier to maintain.  I am mostly doing this to try and find a job – I know how stiff the competition is, and I don’t want anything to put an employer off hiring me.  *sigh*  I’m also getting sick of standing out all the time, especially now that I’ve left the student bubble of Nottingham and am in the “real world”.  Sitting in a doctor’s waiting room, or in the Job Centre, feeling people’s eyes on me when I wish I was invisible… it’s not a nice feeling.  I’m almost looking forward to being a normal colour again, actually.

p.s. want to dye your hair?  Read my how-to guide!