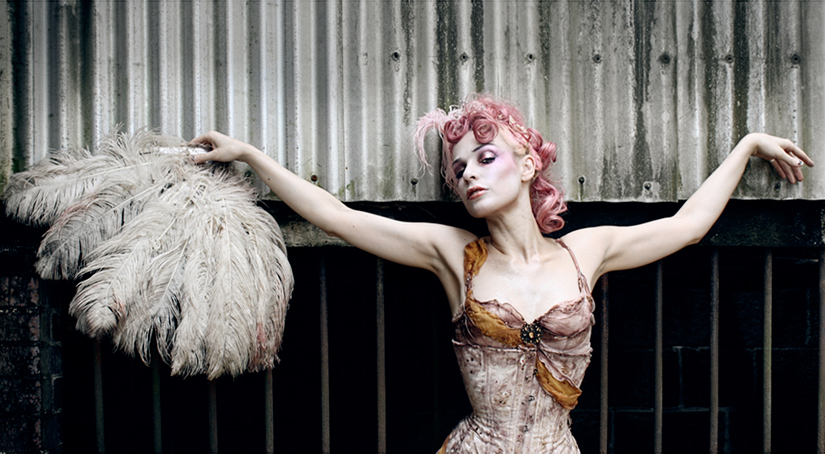 This weekend I saw Emilie Autumn live in Nottingham with my good friend Sarah (she stayed over for the weekend and we had such a good time – we talked about feminism, good and bad university experiences, romance, music, and loads more ♥ ).

After a pit stop at Wagamama we headed over to the gig in Rock City, where we immediately bought some merchandise, including a copy of Emilie’s new book, The Asylym For Wayward Victorian Girls.  I’ve been reading it this morning and I’m thoroughly enjoying it so far.  The gig itself, however, was pretty disappointing.  The main drawback for me was the fact that most of the music we heard came from a backing track and not from live instruments as we expected.  Sadly, even most of the violin and harpsichord sound came from the backing track, as during one song she started off playing the harpsichord, and halfway through the song she got up and the harpsichord was still playing!  She played a violin solo at one point (Face the Wall) which definitely was live because the distorted violin sound was buzzy and harsh, but when she played violin in other songs (e.g. Liar) the violin sound was exactly the same as it was on the album (that is, much clearer and less buzzy), which gave me the impression that she was just miming along (although in Liar she did play the intro live, and the rest of the song sounded like the album).  Not only that, but the sound lacked any impact whatsoever; it sounded tinny and rumbly, like they’d cut out all the mid frequencies.  I appreciate that a lot of the electronic/industrial music on the album would be difficult to recreate live, so I understand why she chose to sing over the recorded version of I Want My Innocence Back, for example.  But with songs such as Misery Loves Company and The Art of Suicide, I can’t see why she couldn’t have recreated it using live instruments.
I also assumed that her backing band “The Bloody Crumpets” would play instruments, but in fact all they did was dance, flirt performatively, and spit tea into the audience.  At one point Veronica mimed along to a recorded version of Unlaced on the harpsichord while Emilie played the violin part, but that was the most we got.  I personally think it would’ve been a better gig if she had an actual backing band who played instruments with her, even if they only played the classical instruments on the album (cello, violins, harpsichord) and provided some backing vocals.
Another aspect of the show that bothered me was the amount of time they spent talking, flirting, kissing, joking around and playing silly ‘games’ (including the stupid “Rat Game” where Veronica brings a girl from the audience on stage and kisses her) – I would estimate that they spent as much time talking as they did singing/performing.  It just all felt very contrived and pointless, and that whole “I wanna kiss a girl…” thing that they all kept doing just made me uncomfortable.  It didn’t feel like an honest expression of queerness, it felt like it was all just for show, and I kept thinking “please just play another song instead!”

There were some things I enjoyed about the gig: the set looked gorgeous, they all had great stage presence, and there was great merchandise on sale, even if I could only afford the book and a poster.  I had a look on the EA forum this evening and everyone there loved the show, so each to her own I suppose.  I prefer a great musical performance to a great burlesque performance, so maybe Emilie’s shows just aren’t for me.  Sarah and I were both reluctant to criticise the show at first in case the other person enjoyed it, but thankfully we both felt the same way!  Still, I was glad that we went and got to see Emilie live, it was certainly an interesting experience.  ♥