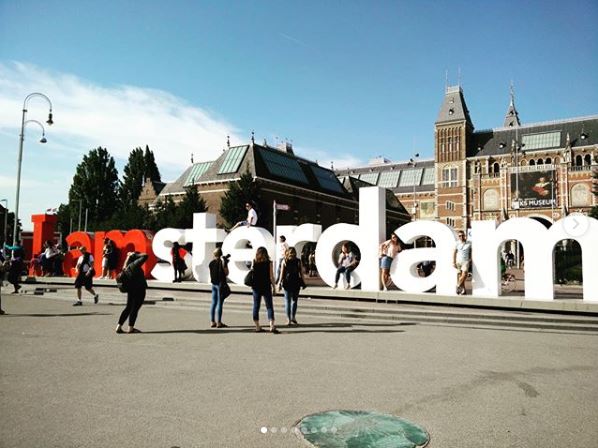 In June I went on a last-minute mini-break to Amsterdam. It was the most spontaneous holiday I’ve ever taken by far – I found a good deal on flights + hotel online, and booked it 32 hours ahead of the flight departure.

I do have an adventurous and spontaneous heart, but it’s always tempered by my worrisome and plan-orientated brain. Unless someone else is taking charge, I get very antsy about going somewhere without a plan, without having weighed up the pros and cons, and without having a road map to ensure I get the most out of the experience. I’m meticulous to a fault.

My partner and I had a few days off work and knew we wanted to do something special and get away from Swansea, especially because both of our day jobs had been super stressful lately. We weighed up a few different options, domestic and abroad, and narrowed it down to Amsterdam or Cornwall  – two places we’d always wanted to visit that were good candidates for a long weekend.  True to form, I made a pros and cons list for both, and when I reviewed it, I clearly realised that my brain said Cornwall (nearer, cheaper, easier travel) when my heart said Amsterdam (a bigger adventure, more spontaneous, see a new country I’ve never visited).  And so, the decision was made – and it was definitely the right one.

Highlights of the trip

Amsterdam has double-decker trains! And they’re so clean and spacious and frequent (suck it, mediocre British trains)! Conveniently, the airport has a train station underneath it, and I’d bought an unlimited travel card online beforehand, so it was super easy to get from the airport to the city centre.

Stayed in the Inntel Hotel in Zandaam, just outside the city … ohmygosh what a beauty, it was worth the stay for the external views alone. The inside was lovely and cozy too. We spent one morning drinking tea and eating breakfast on the canal side, overlooking the beautiful hotel and it was just perfect. *dreamy sigh*

The morning we arrived, we took part in a lovely boat cruise through the city centre canals, with a knowledgeable local guide who talked us through the history of the city and its unique architecture. We paid a bit extra for a smaller open top cruise, and it was so worth it – the experience was peaceful, picturesque, and a perfect way to start the trip. I used Stromma cruises, I would highly recommend them.

I tried raw herring, the national dish, served with pickles and raw onion. It had the consistency of smoked salmon and tasted like very salty fish – not as terrible as it sounds, but definitely not my cup of tea. I valiantly ate 1/3rd of the fish, and discreetly binned the rest.

Went on an evening walking tour of the Red Light District with a tour guide, who talked us through the history of sex work in Amsterdam, and showed us the iconic sights, including the window brothels, the world’s first condom shop, sex toy shops, street art, and strip clubs. We weren’t allowed to take photos for most of the tour, to protect the identities of the sex workers – apparently many sex workers keep a cup of pee next to them while they work, which they throw over any tourists who try to take photos of them!

Visited Body Worlds: The Happiness Project – a museum dedicated to the human body and the physiology of happiness, featuring over 200 anatomical specimens of real human bodies.  I’ve been doing a lot of reflecting recently about what it means to be happy, and what I need to be happy, so our visit came at a good time. It was a very beautiful and affirming experience.

[Content note: donated preserved human bodies from 2nd picture onwards] Went to the beautiful Body Worlds: The Happiness Project exhibition, focused on the secrets of happiness and its effects on the human body. All exhibits are made of real human bodies that have been preserved with liquid polymer. Fascinating and beautiful, I highly recommend it to anyone planning to visit Amsterdam. As an aside – does the last picture remind anyone else of banana slices? 😂 . . . . . #amsterdam #iamsterdam #bodyworlds #thehappinessproject #bodyworldsamsterdam #happiness #museum #exhibit #happy #body #humanbody #biology #humanbiology #visitamsterdam

Visited Our Lord In The Attic, a hidden gem on the border of the red light district – it’s a 400-year old canal house that hides a secret church in the attic,  hidden away due to the persecution of Catholicism in Holland in the 17th century.

Visited the Homomonument, a monument consisting of 3 pink triangles, to commemorate gay and lesbian people throughout history who have been persecuted for their sexuality (though disappointingly there’s no mention of bi or trans people).

🏳️‍🌈 Queer Amsterdam 🏳️‍🌈 We visited the #homomonument, a monument consisting of 3 pink triangles, to commemorate gay and lesbian people throughout history who have been persecuted for their sexuality (though disappointingly there’s no mention of bi or trans people). On the canal we sailed past the famous 7 dancing houses on the Amstel river, which host Pride parties every year because the houses aren’t “straight”! Also, we saw *lots* of rainbow flags flying from homes, boats and bars throughout the city. Didn’t have time to visit any of the gay bars but that’s definitely on my list for the next visit! . . . . . . #amsterdam #iamsterdam #queeramsterdam #lgbt #amstelriver #dancinghouses #canal #travelgram #instatravel #visitamsterdam #pride #prideflag #eurogram

Visited the Beurspassage, which houses a beautiful piece of public art called “Amsterdam Oersoep.” Oersoep translates to “primordial sea”, and the artwork tells a visual story of how all life on earth began in the water. It was beautiful.

Afternoon visit to a coffeeshop (the name for cafes that sell weed) where I smoked a joint and felt very awkward about the whole thing.  Coffeeshops have full menus of all the different kinds of weed they sell, usually with info about their intensity, and the kind of high you’re after. Most coffeeshops also sell space cakes! The menu was completely overwhelming to me, so I spoke to a member of staff about what I was after and she recommended something suitable. I felt like a dorky tourist, but I figured that coffeeshop staff are used to that sort of thing, so I swallowed my pride and spoke to her regardless. I was very tempted to have a spacecake, but decided to go for a joint instead, so I had more control over the intensity of the high, and so it didn’t linger in my system as long.

We had grand plans to peruse the Van Gogh museum while high, but once we got to the museum we found out that you have to pre-book entry online, so we weren’t able to get in. (Tip: most of the museums in Amsterdam require online pre-booked entry due to high demand so make sure you do this before you go). Instead we went for a walk around the museum quarter and then around the Vondelpark in the sunshine.

The Netherlands colonised Indonesia in the 16th century, resulting in a lot of Indonesian food making its way back to the Netherlands. One of the iconic dishes is called Rijsttafel (translates to “rice table”), which is basically one large bowl of steamed rice, served with up to 25 small indonesian side dishes. On the last night of the trip, we shared a rijsttafel in Kartika, with 1 big basket of unlimited white rice and 14 small sides (a mix of vegan, veggie, and meat dishes) and it was fucking amazing.

More cool things I want to do the next time I visit Amsterdam: