February has been such a whirlwind of a month – a busy, tiring, formative, challenging month that has really pushed my limits!  Here’s what I got up to: 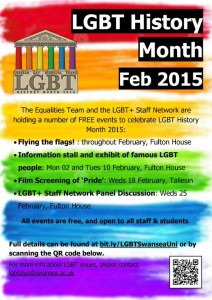 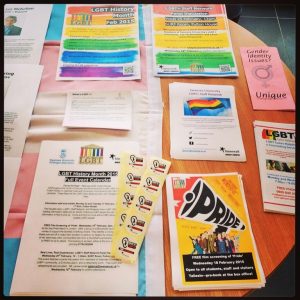 1. I organised and hosted a suite of events for LGBT History Month at Swansea University in my role as LGBT+ Staff Network co-chair, which was incredibly challenging, but super rewarding.  Here’s what I did:

2. I came out to my parents!  I was really nervous, but they responded in a loving and supportive way 🙂

3. A few network members, myself included, were featured in the South Wales Evening Post, to promote the LGBT+ Staff Network’s new LGBT+ Allies Programme!  They took a nice photo of me too.  Read my profile online here. 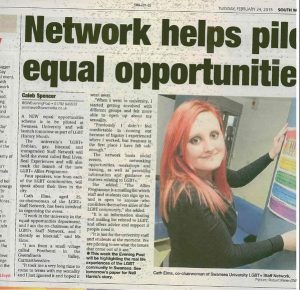 4. I performed at Pirate Jenny Cabaret’s Acoustic Showcase last week, which went really well.  I performed 2 songs, and gave a little talk on being an introverted musician, which got a round of applause!  I got to listen to and meet some really talented local musicians, and received some congratulations and kind exchanges of words afterwards.

5. I was invited to sell my zines at an LGBTQ party in Swansea, titled a “jilted lovers dance party revenge disco”!  We drank dark rum, listened to some excellent music on vinyl, including Kate Bush, Smashing Pumpkins and Joy Division, and sat beneath a giant poster of Sylvia Plath.  Very cool.  I had a great time, and sold a good amount of zines, the proceeds of which were donated to the Terrence Higgins Trust.

6. I struggled through a dark patch of GAD, and am pleased to say that I’ve recovered significantly over the last few weeks.  I still feel wobbly, but am mostly feeling better.  I often feel reluctant to talk about my mental health publicly because it feels so deeply personal; but at the same time, it’s such a big part of my life and colours so much of what I do that it feels dishonest to pretend that it’s not there.  So I thought I’d mention it.  Of everything I did this month, coping with my GAD was the hardest part – though undoubtedly the fact that I kept so busy contributed to my recovery.

2. Carmarthen Comic Con – I plan to cosplay as Marceline from Adventure Time (specifically this outfit, from one of my favourite AT episodes).

3. I’m providing university-wide staff training on “distinct issues faced by lesbians and bisexual women” at work in March!  I’m not sure how I ended up being such a prominent queer person in my workplace, but it seems to sort of escalate with each passing month, ha.  This is of course a good thing!

4. Alongside LGBT History Month, I’ve been working my butt off on ‘Inspiring Women’, a Swansea Uni project which profiles inspiring women studying and working at the university.  It’s launching on Monday 02 March – I’ll share more after the launch!

6. Christina Martorana, a PhD student from Florida, is writing a book on feminist agency and is using my zine series Here In My Head as one of the texts studied!  How cool?  Christine is in the process of finishing this project off – more details when it’s all done and ready!

7. Daf and I are going to Iceland at the end of the month to (hopefully) see the Northern Lights! It’s been a dream holiday and bucket list experience for both of us for years, and we’re super excited.