I need music that makes me feel. 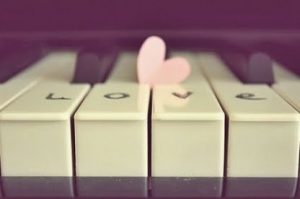 image via We Heart It

It’s been so long since I listened to new music and felt moved.

I remember the first time I ever listened to Tori Amos in 2006. It was in Virgin Megastores in London, when the only way I knew how to sample music was to go into a big store and put the CD in their CD sampling decks (remember those? Do they still exist?).  I had seen a lot of my LiveJournal friends use Tori Amos lyrics in their avatars and I was intrigued. I wrote the lyrics down in my diary before I even knew what songs they were from – maybe she’s just pieces of me you’ve never seen. Sweetest cherry in an apple pie.

So, when I visited London in summer 2006 with my family, I decided to seek out Tori Amos among their vast stacks of albums. They had one album of hers there – ‘Under The Pink’. I listened to it, sort of expecting something poppy and sweet like Michelle Branch, who I quite liked back then. The first track I listened to was ‘God’.

Wow. So dreamy! So complex, deep, dark but melodic, multilayered, the emotion in her vocals, the power of her words. And to hear a piano used so creatively! It blew my mind.

I bought the album, listened to it non-stop for about 6 months. Now, every time I listen to that album I’m taken straight back to autumn 2006! I went out and promptly bought every other album of hers.

It was around that time that I went through a very prolific period of stirring musical discovery, all recommended to me by Tori Amos fans – The Dresden Dolls, Bjork, Fiona Apple, Emilie Autumn, Tegan and Sara, Kate Bush…

You don’t have to speak, I feel…

Those songs stir me. You know, when your heart swells and your brain feels as if it’s seeping colours and you feel that you could almost cry not because you’re sad but because you don’t know how else to get those feelings out? They made me want to create beautiful music of my own, to process my overwhelming and confusing emotions by turning them into art.

That music got me through the most difficult patch of my life – the year 2007, when I was parasuicidal, but too afraid to die. The most frightening thing about depression is when you become numb and indifferent about life; it’s incredibly comforting to still be able to feel something, even if that feeling is “oh god my life is so depressing, they could make a movie all about how depressing my life is and people would cry and cry and cry!” It feels strange to say that a song called ‘The Art of Suicide’ helped me move beyond suicidal feelings, but it really did!

But I’ve been stuck in a big rut for the last 3 years, still mostly listening to all the same artists – I’m not as moved by them after having listened to the songs 100 times over.

I regularly ask friends to recommend new music to me, but so far I haven’t found what I’m looking for. A few recommendations yielded positive results – notably, Rufus Wainwright, Poe, and St Vincent – but mostly, I can’t find anything that really strikes a chord with me.

People recommend all the classics – Bowie, Velvet Underground, Tom Waits, The Cure, Elvis Costello – but I don’t know, I just can’t connect with them. It’s hard to explain why. I do tend to prefer female singers, but not exclusively. I know I tend to prefer complexity and multi-layered arrangements, but again not exclusively. I like poetic lyrics, but not everyone’s poetic lyrics strike a chord with me. I prefer rock-influenced music, but a lot of rock music feels kinda meaningless to me, lyrically. So what is it about a song that can move me to tears and butterflies?

I started worrying that I was never going to be able to connect with music anymore. I was taking Prozac for my long-standing anxiety disorder, so I feared that perhaps my meds had dulled my capacity for joy.

But then I stumbled across the Nightmare Before Christmas soundtrack last week having not heard it for over a year, and when I heard ‘Jack’s Lament’ I felt that distant heart swell that I’d been missing for years. *

oh somewhere deep inside of these bones… ohh that bit is so graceful.

I’ve realised that I am still capable of being moved, I just need to find the right music.

So. This is a call for help! Because I don’t think I exhausted the world’s supply of moving music by the age of 20. What music stirs your soul? What is it that you like about it? What are your favourite songs to listen to when you want to cry it out? Would you like to make me a mixtape?!

* – My favourite soundtrack of all time is still The Nightmare Before Christmas, and has been ever since my childhood – it’s my dad’s favourite film too, and we’d watch it together every halloween.  It gives me many warm fuzzies. (As an aside: I can’t help but feel a bit embarrassed about admitting that it’s my favourite, purely because it’s become so popular with “alt” teens in the last 6 years or so and I don’t want anyone to think that I’m jumping on a bandwagon! Loathe as I am to be a hipster fuck and feel annoyed when something dear to me is mainstreamed.)