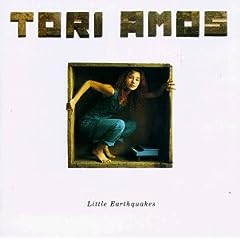 Emotionally and musically intense, Tori Amos’ debut album Little Earthquakes is at once moving and challenging, with a stunning set of musically complex and brutally honest songs. It’s one of my all-time favourites, and one album that inspired me to write my own music.

Lyrically, the songs on this album are her best and most personal of her career – here she tackles the themes of sex, religion, relationships, identity, and loss in an uncompromising manner. The timeless classic Crucify is a lyrical highlight, in which she explores the bondage she suffered during her Christian upbringing: “Why do we crucify ourselves every day? My heart is sick of being in chains…” Another favourite is the bittersweet Happy Phantom, which juxtaposes playful melodies with lyrics about death and the afterlife.

Musically, the album is superb, with lush piano melodies, beautiful string arrangements, and powerful rock arrangements. The songs are complexly structured and excellently-executed, detailing some intensely intimate personal feelings, best showcased in the string-laden ballad Winter, which explores memories of her father, or the beautiful hit-single Silent All These Years. The electrifying Precious Things is another musical highlight (and my personal favourite), which uses powerful rock instruments to bolster an already powerful song, until its effect is almost violent.

There is much to be admired here vocally too – her voice is wide-ranging, dynamic and versatile, capable of handling many styles of music with relative ease. The vocal highlight of the album is undoubtedly the stark Me and a Gun, a disturbing account of her own rape. Sung without accompaniment, the song’s dark subject matter is rendered even more harrowing.

A wonderful, accessible album, Little Earthquakes remains among her best and most enduring works, and sounds as fresh today as it did when it was first released in the early 90s.